On the Town with Donna Hayes at the Metropolitan Room 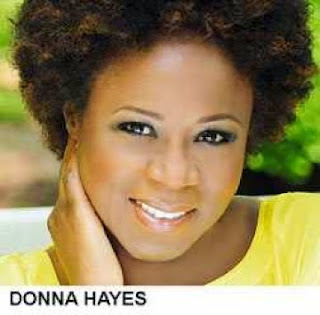 Many thanks to promoter Richard Skipper for inviting me to another wonderful show at the Metropolitan Room. Donna Hayes lit up the house. When your audience includes Julie Budd, who came despite recovering from a cold, you're doing something right.

In fact, it seemed Ms Hayes could do no wrong. I was seated in a booth across from a fellow press person, David, dressed snazzily in a 1950s jacket and bowtie from O, Mistress Mine in Chelsea. Richard was in the booth directly behind us. In fact, we were back-to-back.

Ms Hayes' patter was autobiographically wonderful! She brought to life her growing up in Jamaica and her move to NYC as a teen. Now I know what a duppy is! (Basically, a Jamaican zombie.) Ms Hayes even sang Ernie Smith's "Duppy or Gunman" as part of a medley with Bob Marley's "One Love."

Donna's set included vibrant covers of standards like Sondheim's "Being Alive," Goffin/King's "Will You Still Love Me Tomorrow," "Home" from the play The Wiz, Simon & Garfunkle's "Bridge Over Troubled Waters,"  Tracy Chapman's "Fast Car" and Coldplay's "Fix You."

Her show last night, Ordnary Miracles, takes its name from a song from the animated film Charlotte's Web (tune co-written by Sarah McLachlan).

The three-piece band (Justin Stoney on piano, Donna Kelly on drums, Matt Scharfglass on bass) was excellent, as was the direction by Gretchen Reinhagen and musical direction by Mr Stoney. Kudos all around! A lovely evening on the town. Thank you to all involved.

Ms Hayes will return to the Metropolitan Room July 19th. For reservations, you may contact Richard Skipper directly. at richardskipper.com
Posted by Dj Buddy Beaverhausen at 10:33 PM